At the Festival: a cross-cultural love story 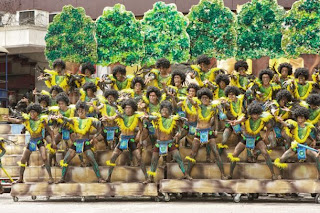 "Son, it's because mom is from Asia."

"Maybe this summer, Son. I will discuss it with mom so you will be able to see your relatives there too. And that takes an airplane, just like when we had our trip to uncle in Turin three months ago, remember?"

"Wow! That's even more exciting then! Okay dad, I hope we can go soon, I really would love to fly again!"

It seems just yesterday when I met Sharry in the Philippines. My friends from Germany decided to see this festival in a city in middle Philippines. It happens every third week of the January and there are just so many activities and contests that happen during this festival. Not to mention of course the "to-die for" beaches in that country.

First, we went to a paradise-like beach called Boracay for one week. That was the second week of January in 2005. The week after, we visited Iloilo to enjoy this "Dinagyang Festival". It is a religious and touristic festival at the same time. Deeply, I am not so aware why this festival came in mind but maybe my friends have more ideas about this. All I can remember is that it was full of fun and people were all happy and nice.

After the festival, we were supposed to go back to Germany. However, I got some virus from tropical water and I had to be admitted to the hospital. My friends did not have any choice but to leave me and take their return flights. My condition was hopeless. No relatives, no friends, weak health condition and no family member was there to attend to my needs.

Sharry was one of the nurses monitoring me in the hospital where my friends brought me in. I was lucky to have mentioned to her my problem. She made it a point to make my life easier: helping me in every means she could and trying to comfort me that things would go all right. After a few days, I was back to normal. I did not go back to Germany that time. Sharry and I spent a little bit of time to know each other further. After 3 weeks I finally went back to Germany and Sharry went on with her work in the hospital.

From the very moment we I was alone, I could not stop but to think of her. A year later, I went to witness Dinagyang Festival in Iloilo agian. I went to the hospital where Sharry work and lucky as I was, she was still there. We dated and and we got married a year later.

Now we have our belowed son. It seems just yesterday but Dinagyang Festival had it happen
Posted by WebbieLady on 3/20/2012 06:10:00 AM 0 detailed ideas